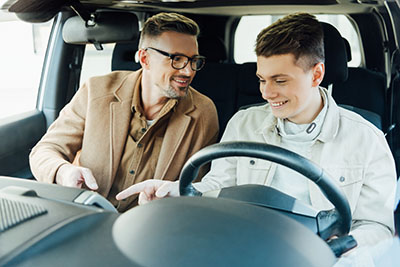 Teen Drivers- How to Help Keep Them and Our Community Safe

It is a sobering fact that motor vehicle accidents are the leading cause of death for U.S. teens. According to the Center for Disease Control (CDC), every day about six teens die, and hundreds more are injured in car crashes. Along with the loss of life and pain and suffering also comes a staggering economic cost of accidents involving teen drivers: over $13 billion annually (CDC).

Why are teen drivers contributing to such grave statistics? Obviously, inexperience plays a role.  Teens are also more likely to speed and/or follow other vehicles too closely.  In addition to these risky habits, teens are the least likely age group to wear seatbelts (CDC). Since research has shown that “seat belts reduce serious crash-related injuries and deaths by about half,” the importance of buckling up cannot be overstated (CDC). While teens cannot legally drink alcohol, many do drink and drive, and intoxication only exacerbates the challenges of operating a motor vehicle for an inexperienced driver.

As if they don’t already face enough of a challenge to focus on the road, cell phones and other devices may also be competing for teens’ attention and posing further distraction. According to the National Highway Traffic Safety Administration, a teen who is texting while driving is 23 times more likely to be involved in a crash than a driver who is not texting.

What can you do to help your teen driver stay safe in the face of these daunting statistics?

While worry is an inherent part of being a parent of a teen, there are steps we can take to reduce the likelihood of serious injuries or even fatalities. At Waitte’s Insurance Agency, we care about the safety of all of the families in our community because we are part of the community. Give us a call when you are ready to talk about your unique insurance needs.