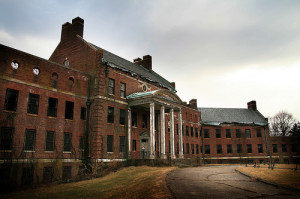 As one of the first areas to be colonized by European settlers, as well as the site of Native American activity for thousands of years, it comes as no surprise that Connecticut has a long and storied history – and where there is history, there are hauntings. Today, with Halloween approaching, you can visit numerous haunted sites across the state, absorbing the atmosphere and quite possibly getting the scare of your life. However, even among Connecticut’s many haunted places, there are a few that stand out for being exceptionally spooky. Take a look at 5 of the most haunted places in Connecticut.

During its operation from 1904 to 1996, the Norwich State Hospital was the site of numerous tragedies and horrific events, from a patient who hanged himself in 1914 to a hot water heater explosion in 1919 that killed two employees. Today, the hospital stands in ruins, and has an exceedingly creepy atmosphere – numerous sightings of ghosts and reports of strange sights and sounds have been common. Although the actual facility is closed and guarded, you can view and take pictures of the hospital from the road.

Known as one of the most haunted cemeteries in the entire United States, the Union Cemetery contains burials dating back to the 1600s alongside modern-day graves. Famous paranormal investigators Ed and Lorraine Warren visited the site and even caught a glimpse of the White Lady, the graveyard’s most notorious ghost. Be careful of visiting at night – policemen guard the cemetery, which is off-limits after sunset.

What is it with old hospitals and hauntings? The Fairfield Hills State Hospital housed criminally insane patients from 1931 to 1995, and, like the Norwich State Hospital, has a long and cruel history and many reports of hauntings. Unfortunately, it is strictly off-limits to visitors.

Dudleytown is a ghost town in northwestern Connecticut, which was founded by Thomas Griffis in 1745. The deaths of many of its occupants have led to modern-day reports of hauntings; however, today’s owners of the Dudleytown land do not allow hikers to visit.

Named for Ed and Lorraine Warren, the famous paranormal investigators, this museum is home to the actual doll that inspired the horror movie “Annabelle”. The doll is known to be haunted, moving on its own and even writing messages on the walls. Unlike the other sites on this list, you can visit the museum freely…if you dare!

Waitte’s Insurance Agency wishes you and your family a very fun, and SAFE Halloween!